Located between 63-66° North, at the edge of the Atlantic and the Glacial Ocean, halfway between Europe and America, at the crossroads of the major east-west and north-south migration routes, Iceland is undoubtedly the paradise of the winged fauna. Species from both continents as well as arctic species coexist. Some cliffs experience a real housing crisis, while heaths and meadows are invaded by innumerable waders.

If you are a bird watcher or wildlife photographer, Fjallabak can assist you with a self-drive journey, tell you which are the most interesting spots, the ideal times…

Also be aware that some of our non-bird-watching trekking passes through regions that are full of birds.

This year Philippe Patay himself, founder of Fjallabak, will lead a two-week long bird trip to the far-off North West Peninsula in June,  The birds that currently arrive in Iceland by the thousands will have a great period of tranquility this year for their breeding season and for nesting. We can rejoice in this, even if it is very frustrating for all of us.

We are thinking of next year 2023 and already we will be offering few departures: 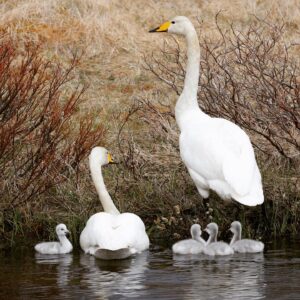 Overland discovery, easy hikes, bird watching and photography List of Icelandic birds 9 days from/to Reykjavik (or 11 days with two nights in Reykjavik) Group limited to 8-9 participants A unique journey guided by Philippe Patay, founder of Fjallabak and one of the best and…
See trip details, dates and booking