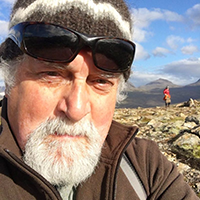 Philippe Patay Petursson, “Filippus“, 66, founder of Fjallabak and adopted Icelander. He has been traveling and leading trekkings worldwide : Sahara, Greenland, Scotland, Faroe, Eastern Africa, Nepal… and recently he discovered a new passion for Patagonia and Aubrac… Philippe was the first to organize regular trek and ski expeditions in Iceland in the early 1970’s. He is a member of the Guide Association of Iceland. An experienced, passionate ornithologist, photographer, mountaineer and world traveler, he also has a penchant for philosophical chats and for telling long jokes in several languages, often at the same time. His love and enthusiasm for the Icelandic wilderness, is shared by his wife and children, all of whom now work in the organization. philippe@fjallabak.is