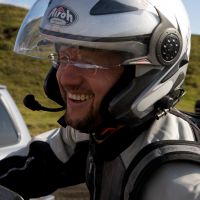 Pierre Brihat “Pierrot” or “Pedro” (46), is proud to be from Marseille, the same town as the Greek explorer Pytheas, who is thought to be the first discoverer of Iceland in about 325BC. He is also renowned (Pierre, not Pytheas) to be the best pasta maker in The North. He has lived in California, but today lives in Paris from where he administers our website and our computers. Pierre has a serious disease called “fidgeting”. This spring, before coming to Icelandic for the season, he beefed up by riding his bike, a powerful BMW (R1200 GS Adv), around America on a 20.000 miles road trip. Despite the time gap and thanks to the internet, we were able to work almost as usual and thanks to Skype, we have visited many motel rooms as the background of a happy bikers face. We think that walking in Iceland is the only thing which makes him forget his bike.